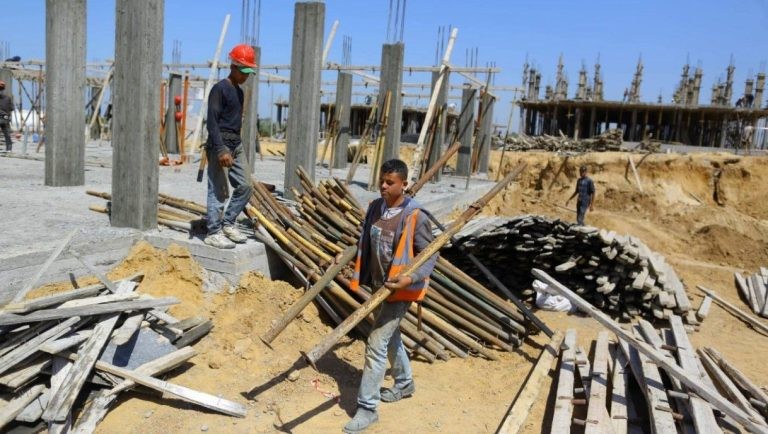 The new report, “Working Palestine: Covid-19, labour, and trade unions in the West Bank and Gaza Strip“, highlights the many ways in which Palestinian workers have been affected by the pandemic, while being subjected to inhumane treatment in the face of Israeli apartheid. Using a labour-centred perspective, this research aims to capture the impacts of the pandemic on these workers and their families, and to map the varied responses of labour activists and unions.

The profound effects of COVID-19 on working conditions and workers have hit the world unevenly. The impact of the pandemic on Palestine is particularly significant because of its captive, fragmented and underdeveloped economy, resulting from decades of occupation.

Life in Palestine has been regulated by severe movement restrictions, restrictions on products entering the occupied Palestinian territories, high unemployment (45% in Gaza in 2019), and large amounts of informal employment. The construction sector “is notoriously exploitative and dangerous for Palestinian workers, with minimal regulation or supervision”. A 2017 survey by the Ministry of Labour found that 70% of scaffolding used on Israeli construction sites does not meet the required safety standards. The negligence of contractors and the Israeli government is directly linked to injuries and deaths among Palestinian workers. In 2019, out of 40 work-related deaths in the Israeli construction sector, 33 were Palestinian. This reveals the division of labour within the sector; while Palestinians are employed in the most dangerous labour jobs, Jewish Israeli citizens hold management, engineering and planning positions.

The report explains how the pandemic has worsened working conditions in Palestine, which is under Israeli occupation and apartheid. It argues that Palestine has evolved in the context of a captive and underdeveloped economy that has endured decades of Israeli military occupation and settlement colonialism. By adopting a perspective focused on local labour, it changes the narrative based on the idea of “two different sides of the conflict” to focus on the structural class inequalities embedded in Israeli society.

With the signing of the Oslo Accords, and the sovereignty trap they induced, control of the West Bank has remained – often indirectly – in Israel’s grip. The economic distribution follows this geographical and political fragmentation, with the main sectors remaining in Israeli hands. This minimal redistribution of power means that most of the Palestinian economy remains essentially captive. The 1994 Paris Protocol, or Protocol on Economic Relations between Israel and the PLO, has resulted in an unbalanced impact, making it impossible for Palestine to develop meaningful trade relations with any third country. Moreover, this protocol gave Israel the final say on what Palestine was allowed to import or export. The Israeli control over pharmaceutical imports is a striking example: it cuts off the Palestinian economy from cheaper imports from other countries.

Moreover, most of the development aid given to Palestine is recycled into the Israeli economy because of the Palestinians’ dependence on Israeli goods and services. Reconstruction and recovery projects prioritise security infrastructure over human services. This creates a positive feedback loop in which Palestinians provide a source of cheap, unprotected labour for Israeli development, without giving workers the income, housing, education or health care needed to find more stable, formally contracted jobs at the micro level, or to attract more opportunities to Palestine at the macro level.

This means that by 2020, the Palestinian labour sector was already fragile, with an embedded structural weakness that prevented it from being resilient to multiple crises. Measures taken in response to the pandemic have had a devastating effect on the working conditions of Palestinians: unemployment has increased significantly; movement restrictions have made access to aid, work and services non-existent; health and pharmaceutical supplies have been severely restricted by Israel; and the education sector has been severely impacted. By understanding the existing conditions of precarious work and restrictions on imports prior to COVID-19, we can better understand why and how the impacts of COVID-19 have been so severe in Palestine. In 2020, 1 in 8 Palestinian workers were employed in Israeli settlements. During the many confinements, they were often vilified as disease agents, and sanitation workers continued their work without contracts, reliable wages, or basic protections. In addition, 61% of key income earners in the West Bank and 31% in the Gaza Strip did not receive a salary during the spring 2020 lockdown. By examining Covid-19 as an amplifier of pre-existing vulnerabilities, this report places the current crisis in a historical and structural context. The focus on the precarious conditions of Palestinian workers has helped to illuminate the complexity of the crisis rather than dismissing it as ‘too difficult’.

Despite inhumane living conditions exacerbated by the uneven effects of the pandemic, Palestinians continue to defend their rights and organise themselves. Work organisation and unionisation have increased, and there has been an increase in social movement unionism among workers and social change movements as a result of the pandemic. The report uses the lens of labour to explore societal power dynamics and is useful even when applied beyond Palestine. This work makes clear that a focus on lived realities and consideration of socio-economic power dynamics is imperative for understanding and implementing change.

In conclusion, the geographical and political fragmentation of the Palestinian people has led to a Palestinian economy that is subject to the Israeli economy. This “captive economy” generates poor working conditions and very little room for manoeuvre and self-sufficiency. This situation is further reinforced by Israeli colonial expansion and the destruction of vital infrastructure, such as hospitals and water wells.

This creates a vicious circle in which much of the aid that goes to the Palestinian Authority is recycled into the Israeli economy, as Palestine buys its products in Israel. This vulnerability has been exacerbated by the COVID 19 pandemic, which has led to a further “deterioration” in the working conditions and socio-economic viability of Palestinians. Nevertheless, Palestinian workers did not remain passive and responded by creating and forming trade unions and social movements, often with strong links to Palestinian feminist movements.