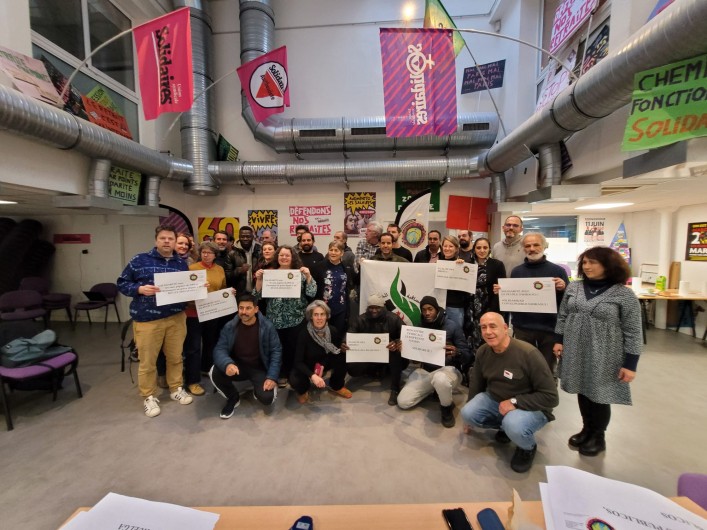 Following the meeting in Rome on 10 and 11 September 2022, the undersigned organizations meeting in Paris on 21 and 22 January 2023 wish to reaffirm their support for the trade union and social struggles currently underway in Europe.

Our debates on the political, economic, social and ecological situations in the various countries represented enabled us to note many points of convergence on the attacks carried out by the governments in the service of capitalism against the workers.

However, in this context marked by the reinforcement of austerity policies, we welcome the revival of social mobilizations, sectoral and general strikes.

In particular, we support :

This meeting allowed us to recall our previous commitments such as the need to be present at national demonstrations in each country. In order to support the struggles, we commit ourselves to organizing delegations whenever possible in the mobilized country and failing that to organize rallies in front of embassies.

As agreed in Rome, the union Solidaires organized an exchange with the miners' union of Kryvyï Rih in Ukraine so that the trade union organizations present could better understand the workers' resistance on the spot in a war context.

Our discussions on trade union rights show that workers' rights are under attack everywhere and that it is essential to have international collective coordination to fight back. This is also the meaning of our internationalist trade unionism.

Our unions are committed to working together to build a European platform of demands on the right to strike, trade union freedoms and the right of representation. We will act to make these demands known and successful.

To continue our work, the CGT of the Spanish State and the Confederacion Intersindical de la Estado España propose to organize our next meeting on 1er and 2 April 2023 in Barcelona.