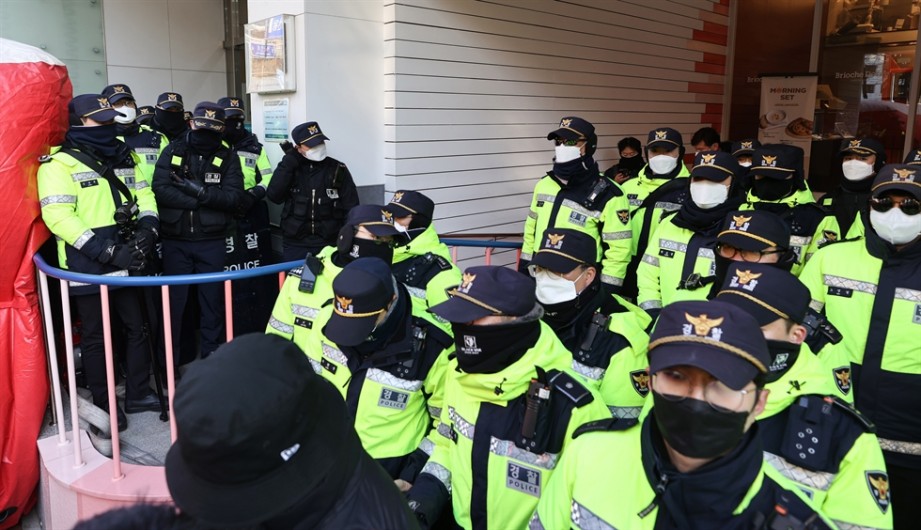 Korea's major umbrella labor union strongly condemned the government on Thursday after its offices were raided by police and the spy agency the previous day. The labor union threatened to stage a nationwide strike in response to what it views as the persecution of labor union activities.

The NIS said it had obtained a search and seizure warrant from the court for the labor union on charges of violation of the National Security Act.

Along with the KCTU headquarters in central Seoul and the Korean Health and Medical Workers' Union office on Yeouido, the authorities simultaneously raided the KIA Motor workers' union office in Gwangju and the houses of four union members suspected of allegedly breaching the law, which outlaws "anti-government organizations" and was merged with the Anti-Communism Law in the 1980s.

The KCTU officials attempted to block the officers from entering, demanding the raid be carried out in the presence of a lawyer, but the investigators pushed ahead and launched the raid, which lasted about 10 hours.

It is the first time the spy agency has raided KCTU headquarters over any alleged breach of the law, according to the labor union.

The union held a press conference on Thursday, where they denounced the government for "staging a show to cover up its wrongdoing."

"Yesterday's raid was merely a show staged by the National Intelligence Service, which had received orders from President Yoon Suk Yeol," said Yang Kyung-soo, chief of the KCTU, saying that a thousand police officers were deployed on-site to raid merely one desk in its small office.

He argued that the current government is abusing the "outdated" National Security Law to persecute the labor union, saying that its members will launch a nationwide strike on May 1, Labor Day, and in July, to protest the administration's recent moves.

Members of the Korea Confederation of Trade Union hold a press conference at its headquarters in Seoul, Thursday, condemning the Yoon Suk Yeol administration for raiding its offices over alleged espionage speculations. Yonhap

The NIS officials said the raid was conducted on individual members of the KCTU, not the whole organization.

The spy agency, which has been conducting a joint investigation with the police, claims that several senior members of the KCTU met North Korean agents in 2017 and 2019 overseas ― possibly in Vietnam and Cambodia ― and received orders from them.

Wednesday's raid came amid the spy agency's intensive investigation into liberal activists and civic groups that are suspected of attempting anti-government activities as a result of orders coming from North Korea's ruling Worker's Party. Beginning in December last year, the investigators have searched the homes and offices of key suspects in Jeju, Jinju, Jeonju and Changwon.

The investigators also said the raid into the KCTU office is a separate case from the ongoing investigations. However, it noted that the two cases have shown similar patterns in their alleged espionage activities. The suspects met North Korean agents overseas and then conspired with other members in Korea to organize an underground anti-government group linked to North Korea.

In a separate case, the police on Thursday raided 14 offices and residences of the construction union of the KCTU and the Federation of Korean Trade Unions as a part of its ongoing investigation into alleged corruption.

Law enforcement authorities speculate that some union members coerced employers to hire certain workers and extorted money from employers. The National Police Agency said it will crack down on unlawful labor activities and root out corrupt practices at construction sites.

Published by The Korea Times