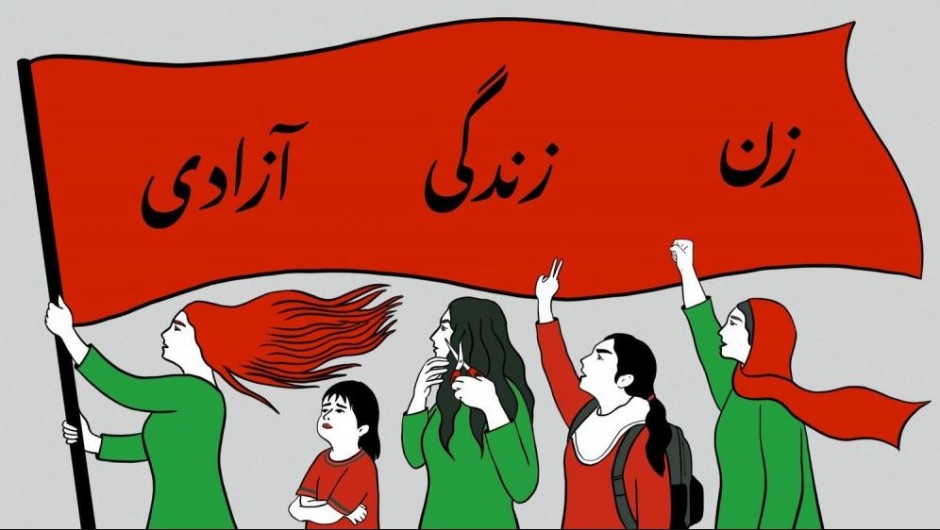 Since the murder of Jina-Mahsa Amini on September 16 by the morality police, a popular uprising unprecedented in its scope, depth and duration has shaken the Islamic Republic of Iran. In less than 48 hours, the slogan "Woman, Life, Freedom" spread throughout the country, then around the world.

The fight for the fall of the Islamic Republic is on

Soon other slogans flourished: "Death to the dictator", "Death to the oppressor, be it the Shah or the Supreme Guide", "Bread, Work, Freedom", "Poverty, corruption, high cost of living, we will go until the overthrow”.

This radical protest movement brings together women, young people, national minorities, workers with or without jobs, in a total rejection of this theocratic, misogynistic and totally corrupt regime. The uprising is anchored in the long term and affects more than 160 small and large cities. With more than 50% of the population below the poverty line and the absence of elementary democratic and social rights, it is the whole system that the people of Iran want to overthrow.

Calls for strikes are increasing, especially among university teachers, workers in petrochemicals, steelworks in Isfahan, public transport in Tehran and its suburbs, truck drivers... The strikers suffer dismissals , arrests and torture.

To date, the repression has caused more than 500 deaths, including 69 minors, thousands of injuries, more than 19,000 prisoners and missing persons, kidnappings. In Iranian Kurdistan and Sistan Balochistan, the Revolutionary Guards are waging a bloody war against the rebellious population. Kurdish towns are undergoing a state of siege that does not say its name.

The violence of this criminal regime knows no bounds. Numerous testimonies attest to the incredible brutality of the conditions of detention aimed at breaking the determination of the detainees. Of the prisoners are tortured, raped, beaten to death.

In order to create a climate of terror and put an end to protest, the judiciary pronounces increasingly heavy sentences against demonstrators. Despite this, the mobilization does not weaken. With courage and determination, students, young people, women, workers, artists and journalists continue to challenge the regime, and it has decided to take it a step further.

The proliferation of death sentences

For the simple fact of having demonstrated, at least 65 people (including 11 women and five children) have been charged with "enmity with God", "corruption on Earth", insurrection or murder. The judiciary connects parodies of trials, without any right of defense and multiplies death sentences.

After the executions of Mohsen Shekari and Majidreza Rahnavard on December 8 and 12, the Iranian authorities proceeded, on January 7, to hang Seyed Mohammad Hosseini and Mohammad Mehdi Karami. Their crimes: having dared to express their revolt in the face of the death of Jina-Mahsa Amini in Tehran or of Hadis Nadjafi in Karaj. The worst is to be feared for those who wait on the death row of Iran's sordid prisons and more broadly for all prisoners.

The people of Iran must be masters of their destiny

In this context and faced with the spectre of a political and social revolution in Iran, the leaders of the great powers are working, more or less discreetly, for the constitution of a Transitional Council, bringing together all the currents of the opposition of the Iranian right, including the monarchists. These currents, liberal on the economic level and authoritarian on the political level, are the opposite of the dynamics of the mobilizations and the social and democratic aspirations which are expressed in Iran.

From the 1953 coup organized by the CIA and the British secret services against the Mossadegh government and its policy of nationalizing oil, to the Guadeloupe conference in 1979 where the heads of state of France, Germany, of the United Kingdom and the United States accelerated the Shah's departure into exile and decided on his replacement by Khomeini, the great powers have always acted, unsurprisingly, in favor of their own interests against those of the peoples of Iran.

Contrary to the solutions imposed from outside, we defend a real campaign of international solidarity with all those who are mobilizing in Iran to put an end to the Islamic Republic.

The outcome of the current uprising will be decisive for the peoples of the region and the world. It is therefore our responsibility, within our means, to help the “Woman, Life, Freedom” uprising achieve its emancipatory aspirations.

Indeed, the repressive machine that is the Islamic Republic will not be broken without a powerful international campaign and without a strong mobilization of world opinion.

- We demand an immediate end to death sentences, executions and the abolition of capital punishment.

- We demand the establishment of an international committee made up of jurists, trade unionists, journalists and NGOs to carry out an independent investigation into places of detention in Iran.

- We support women's fight for the right to control their bodies. We demand with them the abolition of all misogynistic laws as well as gender apartheid.

- We support the fundamental and democratic rights of Iranian men and women, whether they are Kurds, Baluchis, Arabs, Azeris, Lors, or Persians.

- We support the workers of Iran in their struggle for dignity, their rights to defend themselves through strike action and the building of trade unions and political organizations.

- We strongly demand from France and Europe the freezing of the assets of the highest leaders of the Revolutionary Guards and the Islamic Republic, including those of the Guide Ali Khamenei and his entourage, the total amount of which is estimated at $95 billion. These fortunes acquired through the plunder of resources, the overexploitation of workers, predation and corruption must return to the peoples of Iran.

- Like what was done against the Russian oligarchs, we demand the freezing of the assets of the Iranian oligarchs.

- We demand the lifting of banking and commercial secrecy in France, in Europe and in the world to block the wealth accumulated by the leaders of the Islamic Republic, the Revolutionary Guards and the companies linked to them.

-We demand the cessation of all industrial, economic and diplomatic collaboration with the Islamic Republic.

As signatories to this platform, we reaffirm our full and complete support for all those who fight in Iran for equality, social justice, democracy and against all forms of autocratic and authoritarian power.

We are at their side by all the means at our disposal, and we are committed to multiplying initiatives of solidarity with the peoples of Iran. Until the victory of this irrepressible revolutionary momentum!