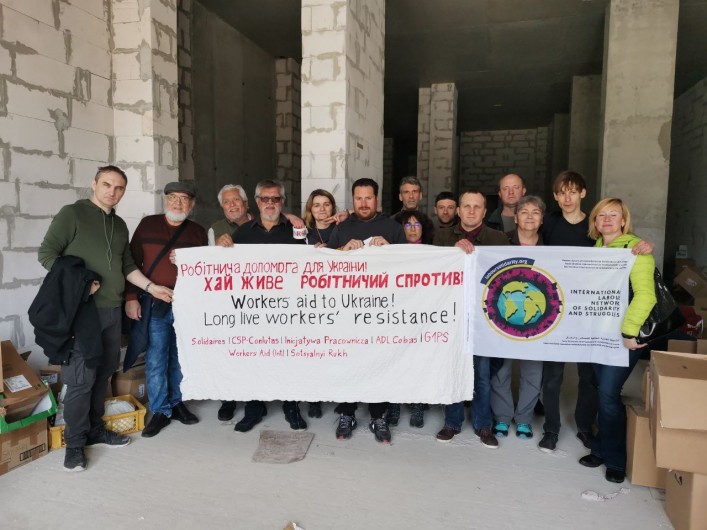 The 1st Workers’ Aid Convoy to Ukraine, co-organized by the independent unions from Brazil, France, Italy, Lithuania and Poland, took place between April 29th and May 2nd. The recipient of the goods and money was the Independent Trade Union of Miners (which also unites steel and engineering industry workers) from the city of Kryvyi Rih. The Social Movement organisation (Sotsialny Rukh) helped us to organise convoy and meeting.

In accordance with the guidelines sent by members of the labour resistance from Kryvyi Rih, the convoy prioritized the shipment of necessities for the internal refugees from the occupied and frontline areas, such as baby food, ready meals, and long-term food. The second group of goods was technical equipment necessary in the frontline areas and territories liberated from occupation: diesel power generators, batteries, power banks, solar batteries, toolboxes, work clothes, sleeping bags, gloves and other items necessary in critical shortages of food, electricity or heating.

The decision to send the 2nd Workers’ Aid Convoy to Ukraine was based on conversations with unionists and activists from Ukraine. It is aimed at strengthening the working class resistance against the Russian imperialist invasion and the Ukrainian government's anti-union and anti-social reforms during the war.

Against the attacks on labour rights under cover of war

A lot has been said and written about the changes in the labour law in Ukraine. The main facts and threats are the following:

We demand the withdrawal of the recent changes in labour law in Ukraine and the strengthening of workers’ rights and power, as they are the backbone of the war. It is in this alarming context that we need to affirm worldwide working class solidarity. Our Ukrainian brothers and sisters, despite their limited resources, struggle to maintain resistance against both Russian imperialism and the anti-social reforms of the Ukrainian government.

Logistics and how to support

According to the reports from the Independent Trade Union of Miners from the town of Kryvyi Rih, technical and medical equipment is still needed. It will be prioritised during the 2nd ILNSS Workers' Aid Convoy to Ukraine.

Shopping and shipping are coordinated by the Polish Inicjatywa Pracownicza (Workers’ Initiative) union. The transfer can be made directly to the bank account:

The amounts received will be reported, as well as all the work that the 2nd Workers' Aid Convoy carries out.

- Down with anti-social reforms during and after the war!

- Solidarity with Ukraine's armed and unarmed popular resistance against the Russian imperialist aggression!

- For the cancellation of Ukrainian international debt!