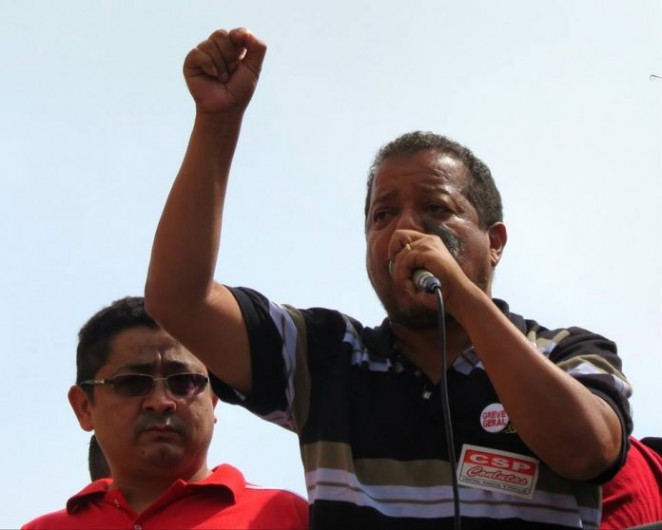 We have learnt with indignation of the dismissal of the national leader of Conlutas, Luiz Carlos Prates, known as Mancha, a worker at General Motors in São José dos Campos, immediately after his return to the factory as an electrician.

We have long known comrade Mancha, whom we respect for his firm stance and vigorous action for the unity and struggle of Brazilian workers, and for his role as an animator in the International Trade Union Solidarity and Struggle Network and the International Conference of Automotive Workers.

In a repudiatory, arbitrary and anti-union decision, GM left a worker with more than 35 years in the company without any reason whatsoever.

Mancha, who had recently resumed his role at the factory as a maintenance electrician, had rotated on the board of the union he had led for several years. Prates is currently a member of the National Executive Secretariat of the CSP-Conlutas union, and with this move the employer is violating the right to job stability.

The Metalworkers' Union of São José dos Campos has sent an extrajudicial note to GM's director of labour relations, demanding immediate reinstatement and a reversal of this new abuse. The claim has legal grounds as GM violated article 8 of the Federal Constitution, as well as Convention 98 of the International Labour Organisation (ILO). Both refer to freedom of association.

Luiz Carlos Prates is a leader who has been at the forefront of struggles for rights and wages at GM and throughout Brazil, and has participated internationally in defending workers' struggles.

Mancha has been a metalworker at GM for 35 years and was caught by surprise by the plant management, who unilaterally dismissed him. He had recently resumed his role at the plant, as a maintenance electrician.

For more than three decades, the union leader has been at the forefront of countless mobilisations and strikes in defence of GM workers. He has also worked directly in negotiations with the factory on wage and profit-sharing campaigns.

Mancha is currently a member of the National Executive Secretariat of the CSP-Conlutas trade union centre. As such, he has the right to job security.

The Metalworkers' Union of São José dos Campos and Região sent an out-of-court notice to GM's director of labour relations, demanding the immediate annulment of the dismissal and the reversal of this abuse of rights. GM violated Article 8 of the Federal Constitution, as well as Convention 98 of the International Labour Organisation (ILO). Both refer to freedom of association.

The NAME OF THE ORGANISATION below stands in solidarity with comrade Mancha and we join the struggle in defence of his reinstatement. We repudiate the political persecution of this historic leader and fighter. It is unacceptable and disrespectful to the freedom of organisation of the working class.

SEND THE MOTION TO THE EMAILS: