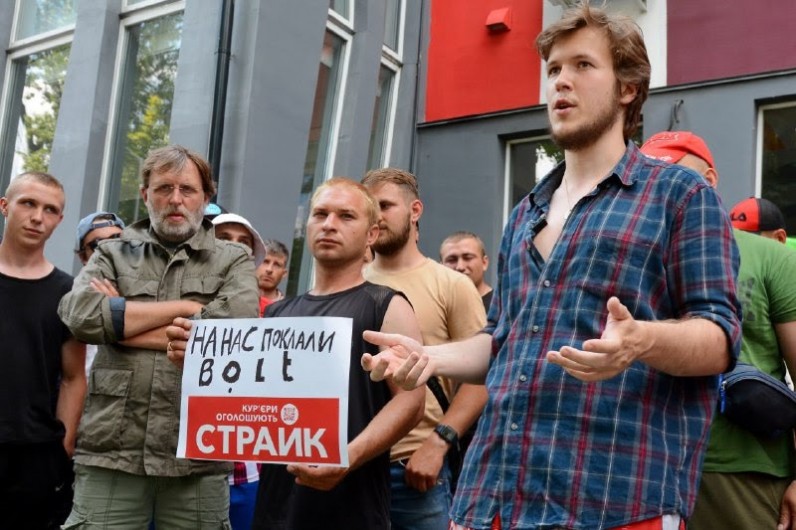 Food delivery drivers for Bolt in Ukraine are seeking a pay raise after their wages plummeted by 60 percent.

Despite often heroic efforts to deliver food under war conditions, Bolt delivery drivers in Kyiv, Ukraine, have seen a 60 percent cut in wages—and they are demanding the company take immediate action to boost wages and provide vehicle maintenance support.

Prohibited from striking while Ukraine is under martial law, the delivery drivers gathered recently at Bolt’s office in Kyiv to present the company with their demands, which include an increase in minimum payments from 84 cents per order to $1.36 per order, and a boost in per-kilometer pay from 24 cents to 41 cents to compensate for the rise in inflation.

“Our wages have been cut to the minimum,” a driver stated at the gathering. “Now they are trying to force us to work for pennies. It is almost impossible to feed one person on such a wage.”

Another driver said he must “work 14 hours a day, 27 days a month” to survive.
Ukraine delivery driver for Bolt in Kyiv, Solidarity CenterThe app-based workers also are urging the company to provide free or low-cost repair and maintenance for their vehicles, most of which are bicycles and motorbikes.

“Bolt Food does not compensate our work expenses in any way,” a driver said. “We bear the risks ourselves. We have to maintain transport at our own expense, we have to pay for fuel, spare parts—and all prices just skyrocketed but our wages were further reduced. These costs reach 70 to 75 percent of income at current prices.”

In addition, workers want Bolt to re-open several app features, such as one that enables drivers to see the client’s address before they accept the job. If the restaurant where they pick up the food is only a few blocks from the client, they only are paid for the short distance from the restaurant to the client’s location, even if they drive miles to get to the restaurant.

Earlier this year, Bolt Food riders in Lviv raised similar demands with the company after Bolt cut wages so drastically workers could not afford gas for their vehicles. Many Ukrainians relocated during the war to Lviv, a relatively safe haven near Poland’s border, and delivery drivers say Bolt took advantage of their plight as they desperately sought jobs to support their families. The delivery drivers won a wage increase July 5 that includes a boost in the amount drivers receive when delivering food during peak times, weekends, late hours and in bad weather, a feature Kyiv delivery drivers also are seeking.

Massive Job Loss and Attacks on Worker Rights
The company’s cutback in wages comes as more than one-third of jobs in Ukraine have been lost since the beginning of the war in February, according to an International Labor Organization report in May. The ILO projected job losses to reach 7 million, or 43.5 percent of the workforce, if the war continues.

Even as the war has decimated jobs and the economy, Ukraine’s parliament passed a law that would significantly erode employees’ rights in areas covering working hours, working conditions, dismissal and compensation after dismissal. The law makes it legal to fire employees who are on sick leave or vacation and allows employers to increase the work week from 40 hours to 60 hours, shorten holidays and cancel additional vacation days. A union’s rights also would be severely curtailed and employers would have the right to unilaterally cancel collective bargaining agreements.
Lawmakers say the legislation would apply only during war. But George Sandul, a lawyer with the Ukrainian worker rights organization Labor Initiatives, says unions and legal experts fear the law will not be revoked.

The legislation did not stem from the war. Similar proposals were pushed months before Russia invaded Ukraine, with the parliamentary committee for social policies and the Ministry of Economy pressing to radically change labor law to favor employers and restrict union rights.