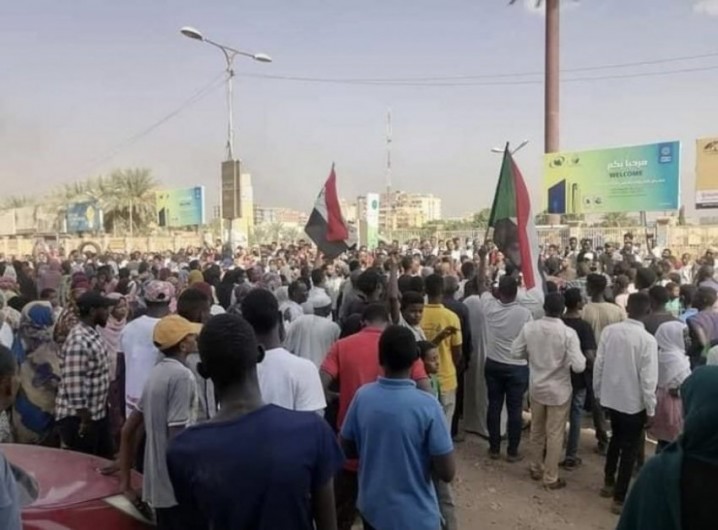 Millions of people are remaining on the streets of Sudans capital Khartoum and other cities, to oppose the coup led by army chief General Abdel Fattah Al-Burhan.
As at October 26, 12 people had been killed and more than 100 injured, as troops fired on protesters
.
The Sudanese Professionals Association (SPA), which played a leading role in the 2019 uprising against the al-Bashir dictatorship, said: This coup is a continuation of the Security Forces of the National Congress Party and its militias, which began on 11 April, 2019 with the aim of blocking the path of the December Revolution and aborting it.

We appeal again to the resistance committees in all districts and all revolutionary political, professional, rights defenders forces in all the cities and villages of Sudan to come together and occupy the streets and barricade them, and to continue all forms of civil disobedience and complete strike until we defeat the coup reaching to what our people deserve under the flags of Freedom, Justice and Peace.

The Sudanese Workers Alliance for the Restoration of Trade Unions issued the following statement on October 26, in response to the coup:

Democratic United Front: A call for solidarity!
There is no alternative but to continue the struggle, bring the downfall of the coup, mobilise our masses and achieve the complete demands and aspirations of the December revolution.
The coup of parasitic capitalism was instigated by the warlord, Hemeti, and Burhan, the Al-Bashir Security apparatus, and the rest of the warlords who traffic in the suffering of their people, and the political brokers who come in every colour and shape.

We ask the working class worldwide to stand in solidarity with the people of Sudan.
Today, October 25, 2021, the great Sudanese people are waging their bright, hard and blood-stained struggle against a military coup. There is no alternative but to overthrow and uproot all the forces that oppose democratic transformation, and who serving the interests of parasitic capitalism and its international and regional masters, must be held accountable for all their crimes, for their corruption, and their deep-rooted hostility to our peoples yearning for freedom, justice and peace.

We, the Sudanese Workers Alliance for the Restoration of Trade Unions call upon our members, female and male workers, craftswomen/men, wage workers, producers and toilers in the countryside and cities to engage in a protracted struggle against this very evident, undeniable coup, we call upon them to engage in civil disobedience and a general strike until the downfall of the counterrevolution. We must do so with the vigilance and caution that is necessary to resist all bargains or deals that run contrary to the demands of the revolution.

We must unreservedly avoid compromises, like the agreement signed on August 17, 2019, which forced the December 2018 revolution into an impasse, and prevented all of its glorious goals from coming into fruition. We urge the people to build an independent democratic union bloc that derives its legitimacy from work and which will be committed to the adherence of its own espoused principles. We are also making it clear that the Sudanese Workers Alliance for the Restoration of Trade Unions is fully committed to doing its utmost best to coordinate, network and deliver all required information that needs to be disseminated for this democratic bloc on our social media pages.

The power of the coup is the power of parasitic capitalism. It is inherently hostile to the common interests of male and female workers and all of the classes of wage earners; it is necessarily hostile to our people and their right to a dignified life. Parasitic capitalism contradicts the just demand of the Sudanese people for sovereignty over our countrys wealth and resources. There is no alternative but the protracted struggle for the downfall of the coup, the liquidation of its compromised institutions and agencies and the repealing of all of its regional and international alliances.
Our message to the honourable non-commissioned officers, the rank-and-file of the armed forces, the officers in the armed forces, the police, and the armed movements, is that they abide by their duty to protect their people and align themselves with the cause of the democratic transition. They should not point their guns at the bare chests of the daughters and sons of Sudan, who stand proud with determination and the yearning for freedom, justice and peace.

We must be clear. This disastrous coup will only serve the same social classes, and the regional and international interests that the Bashir regime always sought to protect, and who in turn stayed quiet in the face of their corruption, actions and crimes throughout dictatorial rule.

We will succeed.
Our people are stronger than murderers and saboteurs, we have accumulated legacies of resistance responsible for bringing down many dictatorships who thought they had succeeded in breaking the Sudanese peoples resolve. The victory of our revolution is certain, regardless of the brutality of the counter-revolutionaries and the thirst for blood among vampiric putschists.