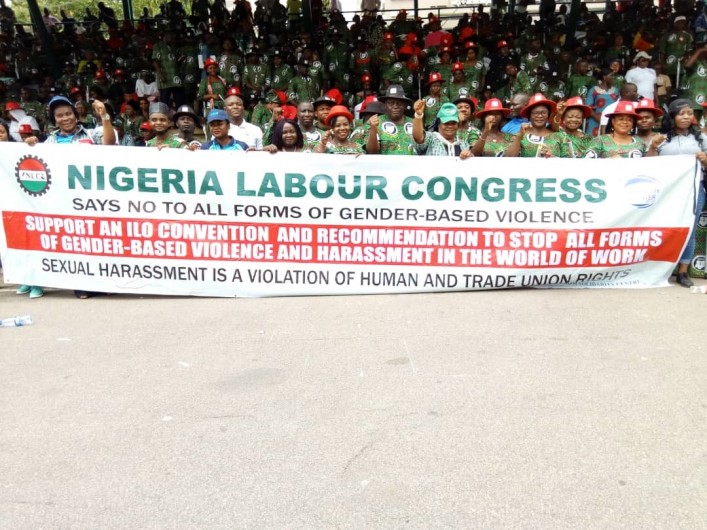 A new report by the Nigeria Labor Congress (NLC) and the Solidarity Center, Breaking the Silence: Gender-based Violence in Nigerias World of Work, finds that gender-based violence and harassment (GVBH) at work is widespread in Nigeria, but goes largely unreported. The report looks at the pervasiveness of GVBH in Nigeriawhich boasts Africas largest economy, the continents biggest trade union movement, and a growing population of 200 million.

A lack of worker-led research about the scope and incidence of GBVH in Nigerias world of work, poor implementation and enforcement of laws and workplace policies, entrenched discriminatory gender norms, and an inadequate legal framework hampered civil society and union efforts to address the problem. Moreover, the COVID-19 pandemic has exacerbated these dynamics, exposing many workers, particularly women and other marginalized workers, to an even higher risk of GBVH.
The NLC and the Solidarity Center partnered to address the lack of data on GBVH in the world of work. The NLC established a women and youth structure known as the National Women Commission in September 2003, which works with NLC affiliates and stakeholders to promote gender equality and empower women and youth to take on leadership positions. It facilitates programs that address GBVH at work.

Through this structure, women workers successfully campaigned for the NLC sexual harassment policy. This victory paved the way for women to play a leading role in the adoption of the International Labor Organization (ILO) Convention 190 (C190)the first global, binding treaty that recognizes the fundamental right to a workplace free from violence and harassment, including GBVH.

A recent incident of alleged GBVH shows the importance of this work. Earlier this month, a magistrate court recommended prosecution for a man accused of sexually assaulting a minor in an open market in Lagos. The International Lawyers Assisting Workers (ILAW) network, a project of the Solidarity Center and now the largest global network of workers rights lawyers and advocates, is assisting with the case.

The courts recommendation is a direct result of awareness training with market vendors about their right to GBVH-free workplaces. Following the ILOs adoption of C190 in 2019, the NLC and the Solidarity Center began training workers to put into practice provisions preventing GBVH. A newly formed GBVH task force in the market brought attention to the alleged assault, leading to a trial in Nigerias high court.

The report results from efforts by women workers to provide concrete evidence regarding the scope and incidence of GBVH at work and break the silence to tell their stories of strength and courage.

Women workers identified two locations for study in Abuja and Lagos. Then, they drafted questions and conducted one-on-one interviews with peers. In the first stagefrom September 7, 2020, to October 29, 2020researchers interviewed 425 women. During the second stagefrom December 7, 2020, to February 26, 2021researchers 494 women. In total, women workers interviewed 919 of their peers and captured data across eight sectors, including the informal economy, manufacturing, healthcare, education, construction, media, hospitality and the public sector.

Behind these numbers are women workers like Amina,* an office cleaner who says she was sexually assaulted by a supervisor and was laid off by her employer. Saraya, a market porter, says she experienced groping and inappropriate touching while commuting to and from work and sexual harassment on the job.

Magdalene, a quality inspector at a bottling company, says she was sexually harassed and sexually assaulted by her supervisors. I find that the joy that comes with going to work every day is no more there, she said.

Ada has co-owned a bar with her husband. His domestic violence in their marriage extends to her workplace. I have never reported to anyone. You are the first person I am sharing this with, she told an interviewer.

An anonymous male youth trader spoke of the need for more training on GBVH. We need training on GBVH for men in our market, he said. I believe that trainings will go a long way in sensitizing men on the negative impact of GBVH on the lives of women and children.

Regina Otorkpa, who interviewed women workers, says, GBVH is a monster silently destroying the confidence and future of survivors still struggling to speak out due to fear of society, fear of self and discrimination.

Having interacted with survivors of the different forms of GBVH in Nigerias world of work, it has become important for the Nigerian government to step up and take a bold step towards C190 ratification. I urge women to be brave and courageous to unmask their fears; it is important that we stop the stigmatization; the struggle against GBVH is a collective one for the good of all.

The report unveils high rates of GBVH at work, which goes largely unreported. Findings include:
-* More than half (57.5 percent) of women workers interviewed said they experienced GBVH in the world of work.
-* Nearly 44 percent said their supervisor or superior had said or done something that made them uneasy due to their gender.
-* Only 19.6 percent said they reported incidents of GBVH at work.
-* More than one-third (35.9 percent) said they rarely received justice even when they reported violations.
-* Some 44 percent said they had suffered gender discrimination that affected their career advancement.
-* Nearly one-third (28.8 percent) said they were pressured for sexual favors at work and touched in ways that made them uncomfortable.

Based on this research, the NLCs recommendations for unions, employers and the Nigerian government include:
-* Increased education and awareness of GBVH among workers, managers and supervisors, the general public and policymakers, including its root causes and impacts and the responsibility of all workers to end it.
-* Ratification and implementation of ILO Convention 190 concerning the elimination of violence and harassment in the world of work, including GBVH.
-* Development of workplace policies to address GBVH and gender discrimination, including safe, confidential processes for reporting incidents; transparent processes for investigation of allegations; remedies for workers who experience GBVH; penalties for perpetrators; and changes to how work is organized to address power imbalances and other risk factors for GBVH in the world of work.
-* Adoption of national legislation incorporating the definition of GBVH from ILO C190, protecting the entire world of work and covering all workers regardless of contractual status, including workers in the informal economy.