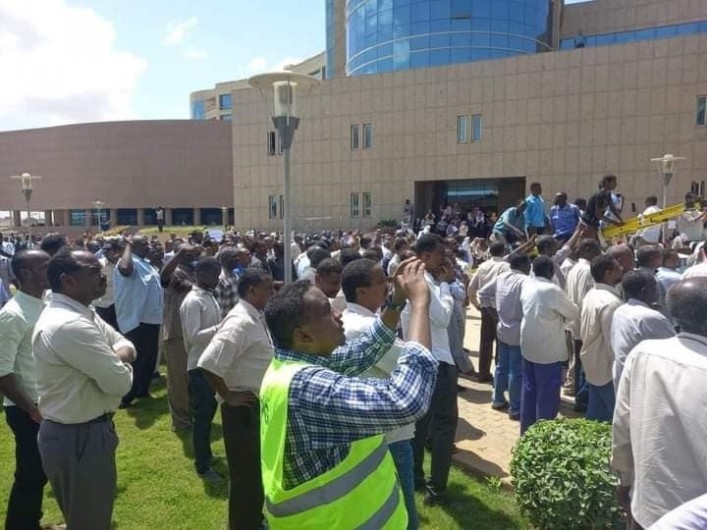 Striking Sudanese electricity workers escalated their ongoing strike over pay by occupying the control room at Bahri Thermal Plant and reducing electrical load by 20 percent. According to TAM (the Alliance of Demand-based Bodies), this is part of a phased protest and is the result of management ignoring workers’ demands for the implementation of the salary structure for 2022 as previously agreed, and the payment of money owned to them since the beginning of the year.

The occupation follows days of workers’ protests outside the Ministry of Energy buildings. The Electricity Workers’ Salary Committee said in a statement on 5 September that workers had been attacked by riot police.

“We warn that the dilapidated electricity network situation portends damage leading to the complete blackout and we hold the Minister responsible for everything that happens as we assured him in today’s meeting. We also apologize to the citizens for any harm done!

No retreat, no compromise.

Our strength in our unity”

The electricity workers’ strike is part of a wider wave of strikes and protests by workers in different sectors across Sudan, with cleaning workers taking action in recent days. Cleaning workers in Khartoum are fighting for permanent contracts and an end to job insecurity, as well as increased wages, in addition to other demands related to holiday work, occupational safety, health and social insurance. In statement published by the Sudanese Workers Alliance for the Restoration of Trade Unions, they said:

"We demand that the status of the workers and drivers of the Khartoum state Cleaning Authority to be changed to permanent and to be compensated for the injustice inflicted on them over the past years, and stress that this treatment should include all workers and drivers of local cleaning bodies throughout Sudan. Because it is a shame and moral deficiency to let them cover the inability of their meagre salaries to meet the cost of living by selling empty cans and bottles, metal materials and others to survive.

In conclusion: We believe that there is no alternative but for the general assemblies to build their trade union organizations, because the circle of infringement of the rights of workers and the rest of the categories of workers is expanding every day, and in our estimation that a free and independent democratic trade union organization based on the legitimacy of its general assembly is enough to protect the rights of its members, defend their common interests and ensure the achievement of the mission and objectives of work and workers towards society as a whole."

Junior doctors are also planning escalating action over the next few days after the Ministry of Health has refused to pay them financial benefits for the past eight months, a strike is planned to start on 11 September.