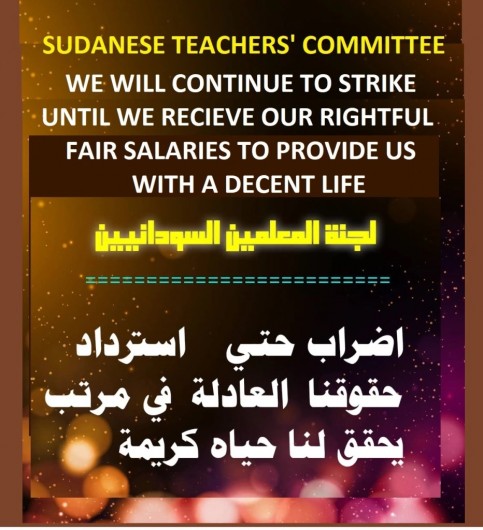 According to reports from the Sudanese Teachers Committee, schools across Sudan have seen strong support for a strike demanding a rise in the minimum wage and the abolition of an unfair pay structure. Teachers and other school staff walked out last week and again on 14 and 15 March as part of the national dispute.

The STC said The reports received from the field committees in the localities of Khartoum State and all the cities and countrysides of the states of Sudan documented an unprecedented response to the call for strike, as the strike covered cities, villages and rural areas. According to the initial reports submitted, we affirm the overwhelming success of the first days strike, with a rate of no less than 99% in the states, and even in a number of localities in Khartoum State, the response rate reached 100%.

As teachers and public education workers walked out for pay justice, school pupils showed solidarity with the strike. The authorities have responded with vicious repression in some areas. STC activists told Middle East Solidarity The arrest of a number of teachers of Nyala Secondary School for Boys took place on Monday, March 14, 2022, at 9.30am. Amongst them is the school headteacher, Mr Omar Muhammad Muhammad Mustafa, Mr Adel Abdul Rahman Adam and Mr Muhammad Hamdallah. They were beaten and insulted by an armed force led by a lieutenant from inside the school, the situation is out of control!

Security forces attacked striking teachers and sprayed primary school pupils with tear gas in Atbara, according to an eye witness video from a teacher seen by Middle East Solidarity. The teacher said Tear-gas grenades were thrown to Zat Alnitagain girls primary school in Atbara city. Girls were panicking and screaming. Number of girls and teachers fainted and the parents were running towards the school to check on their children.

The STC says its members will not be intimidated and called on them to continue the strike. The Committee calls upon the masses of teachers and public education workers in all cities, villages and rural areas of Sudan to unite to achieve our full demands without paying attention to the language of promises, pressure, terrorising and threats against them.

What you can do: